Far, far away from the pine-scented woodfires of his mountain home in Sail village, sometimes I wonder what it must have been like for my father to arrive in the hill station and stray into places like the Charli-Willy Hotel? What did he make of the trophies mounted on the walls? Or of bearers in white uniforms, maroon cummerbunds, gold sashes with tassels flashing, flitting between the spit and polish of the place? 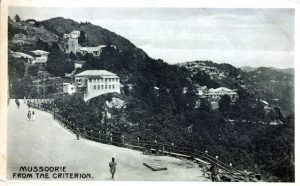 In the summer of 1888, this is where you would have found Rudyard Kipling. He gave short-changed the station, giving it four measly lines:

“And there were men with a thousand wants,
And women with babes galore
But the dear little angels in Heaven know
That Wutzler never swore.” 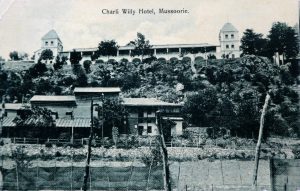 Who was Wutzler? Henry Wutzler was, at the time, the German-born owner of the Charleville. Famed for a foul mouth that sent the staff scurrying to pamper the visiting viceroys and royalty. Kipling’s has another Mussoorie connection. But not one, I think he cared to remember. In its formative years, the Indian National Congress had quite a few Anglo-Indians members. Among them was a young captain, a Mussoorie-wala, who spoke at the All-India session. On 1st January 1889, a newspaper reported the meeting, calling the meet a kathputli nautch, wherein “a brown man who called himself a military captain.” This was a thinly disguised reference to the short-tempered Captain A.W. Hearsey, who wasted no time, armed himself with a horsewhip, and arrived at the editor’s bungalow in Allahabad.

Finding the offending reporter missing on furlough, he horsewhipped George Chesney, the editor instead. All hell broke loose. Litigation followed where badgering the short-fused captain, the waspish counsel, held him responsible for much of the doggerel, printed by the press. The Counsel chose a couplet:

“While your fathers were selling caps, coats and breeches,
Our sons were fighting in trenches and ditches.”

“Do you mean to say,” asked the lawyer, “that while you were fighting, we were selling coats and breeches?”

“And caps – Oh! And if anything fits you are welcome to wear it”! Came the reply.

Charged with assault, Hearsey was sentenced to a month’s imprisonment in Naini jail.

‘The Native Press is pointing out with glee that I ought to have been whacked,’ Kipling wrote to a friend.

A hundred later, starved for space, Mussoorie’s flimsy structures invite chatter. Just the other day, some old acquaintances, having checked into a hotels, dropped by to see me. They were not exactly thrilled.

‘Our room has wall-to-wall beds!’ he laughed, adding, ‘With furniture is painted on the walls.’
And the wife chipped in: ‘The walls are so thin you can hear people changing their minds in the next room.’

Perhaps the death knell has rung on the days of sprawling old hotels like Charleville. That story began in 1851 when General Wilkinson acquired the grounds of Happy Valley in Jaunpur’s Chahjuli Patti to build one of the finest hotels in the hills . Was it meant to be called ‘Sharlyville’ as in the French city that stands along the river Meuse bearing that name? Or will you prefer to hold course with the locals, they always called it: ‘Charli-Willy’ after the names of Hobson’s two sons: Charlie and Billy? Hobson was the Manager of the Mussoorie Bank, who on retirement took over the place in 1861.

In its heydays, the hotel had a hundred and twenty-two rooms, making it the largest hotel in India outside Bombay. It’s public rooms included a large dining room, a children’s dining room, ballroom, public drawing room, smoking room and card room, a fine billiard room with two tables, and a ladies cloak room for ball nights. It’s linen room was managed by a European housekeeper, and in addition to the finely appointed kitchen, there was a bakery and a confectionery. There were two tennis courts and a badminton court. There was out-office accommodation for 400 servants, stabling for fifty horses, a piggery, a poultry yard and fruit and vegetable gardens spilling over its twenty-five acres.

Today it houses the Administrative Academy. That’s another tale for another day. Charli-Willy lives on in lore and Kipling’s four lines of verse.

Ganesh Saili born and home-grown in the hills belongs to those select few whose words are illustrated by their own pictures. Author of two dozen books; some translated into twenty languages, his work has found recognition world-wide.